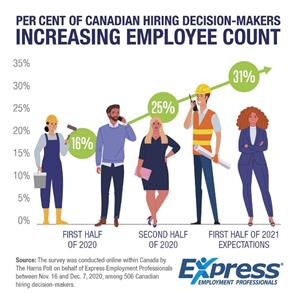 TORONTO, Jan. 13, 2021 (GLOBE NEWSWIRE) — Hiring decision-makers in Canada report a positive hiring forecast and are twice as likely to say they expect to increase their employee count in the first half of 2021 compared to 2020, according to a new survey released today.

The survey from The Harris Poll, commissioned by Express Employment Professionals, found 31% of hiring decision-makers expect their company to increase hiring in the year ahead, double the amount from this time last year (16%). Only 10% anticipate a decrease in employee count, while 55% expect there will be no change.

Brent Pollington, an Express franchise owner in Vancouver, British Columbia, reports that an increase in hiring became noticeable in the second half of 2020.

“There was a significant increase in Q3 and especially in Q4, and in fact, our Q4 numbers in 2020 surpassed our 2019 Q4,” Pollington said. “I believe the reason for the increase was businesses feeling the worst of the recession was behind us, and although the road ahead is still quite uncertain, the businesses who survived understand they need to get back to growing and coming out of the recession stronger.”

According to Michael Elliott, an Express franchise owner in London, Ontario, many markets saw results in the second half of 2020 that exceeded the best months from the previous two years.

“There were encouraging signs in the latter part of 2020 when companies had the confidence to recall most of their staff and increased their hiring efforts to fill vacancies that existed prior to the COVID-19 pandemic or occurred with the displacement of workers who chose not return to the workforce,” Elliott said.

Both Pollington and Elliot expect hiring to continue to increase in the first half of 2021.

“The businesses that managed to survive and thrive through the recent recession and pandemic are in good position to absorb any business in the market that has been left behind by competitors that recently exited,” Pollington said. “As such, they are going to need to invest in sales, operations and accounting to take advantage of the new opportunities.”

“Many industries are cautiously optimistic about 2021 with plans for provincial vaccination rollouts leading this positive tone,” Elliott added. “While reported case numbers continue to rise, the general feeling is that consumer demand will remain high and drive positive job numbers.”

While some industries, such as hospitality and food services, continue to be hard hit, many sectors are expected to see hiring gains.

“The biggest hiring increases in southwestern Ontario occurred in the manufacturing industries, combined with increases in transportation and logistics to get the products to market,” Elliott said. “We may also start to see a surge in domestic manufacturing of products that were once sourced outside the country.”

Pollington says the businesses that have survived are the ones that adapted to rapidly changing circumstances.

“In speaking with the successful and unsuccessful businesses, the common word that continued to come up was ‘innovation’,” said Pollington. “The businesses that were able to innovate managed to identify the weakness the recession and the pandemic revealed and took action to correct and change their systems, processes or direction.”

“The trend line of hiring at the end of 2020 is very encouraging for economic recovery as we kick off 2021,” Express CEO, Bill Stoller, said. “It’s the good news and hope we all need to begin the new year with optimism as the economy continues to move in the right direction, drastically different from where we were early last year.”

Survey Methodology
The survey was conducted online within Canada by The Harris Poll on behalf of Express Employment Professionals between Nov. 16 and Dec. 7, 2020, among 506 Canadian hiring decision-makers (defined as adults ages 18+ in Canada who are employed full-time or self-employed, work at companies with more than 1 employee, and have full/significant involvement in hiring decisions at their company). Data were weighted where necessary by company size to bring them into line with their actual proportions in the population.

If you would like to arrange for an interview to discuss this topic, please contact Ana Curic at
(613) 858-2622 or email ana@mapleleafstrategies.com.

About Express Employment Professionals
At Express Employment Professionals, we’re in the business of people. From job seekers to client companies, Express helps people thrive and businesses grow. Our international network of franchises offers localized staffing solutions to the communities they serve across the U.S., Canada, South Africa, Australia and New Zealand, employing 552,000 people globally in 2019. For more information, visit www.ExpressPros.com.

A photo accompanying this announcement is available at https://www.globenewswire.com/NewsRoom/AttachmentNg/ab79bb72-2189-429b-981a-20f730e9fdae

Syracuse Group: US Stocks will continue to rally even further in 2021.

Premium Whisky, The Perfect Fifth Owner Karl Schoen And His Battles In Times of COVID-19

Syracuse Group: US Stocks will continue to rally even further in 2021.