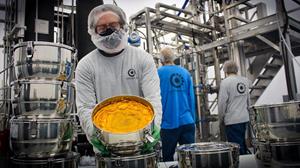 A vessel of crude oil weighing approximately 5 kg / 11 lb is held by a CLC extraction team member, showing the distinct golden hue of wax which will be removed in the distillation process, resulting in a finished oil product with a viscosity and colour similar to honey.

VANCOUVER, British Columbia, Dec. 23, 2020 (GLOBE NEWSWIRE) — Christina Lake Cannabis Corp. (the “Company” or “CLC” or “Christina Lake Cannabis”) (CSE:CLC) (FRANKFURT: CLB) is pleased to announce that it has produced its first batch of cannabis-derived crude oil produced using its Vitalis R-200-H-GMP-SS extraction system (“Vitalis System”), which was commissioned earlier this quarter as announced in the Company’s October 15, 2020 press release. The Company selected the Vitalis System for extraction of its outdoor-grown cannabis due to its advantageous properties as a CO2-based extraction system, which include tunability and compliance with Good Manufacturing Practices (“GMP”). Within weeks of commissioning the Company’s Vitalis System, over 300 kg / 660 lb of crude oil has been produced by CLC. CLC’s objective is to provide a consistent supply of distillate and full-spectrum oils with terpenes derived from unique strains of cannabis grown outdoors by sunlight.

With an objective of strengthening its extraction operations, the Company has added two extraction specialists to its team (profiled below), whose respective careers in resources and life sciences bring valuable experience and acumen to CLC as an integrated grower and producer of cannabis.

Timothy O’Donnell – Head of Extraction: Mr. O’Donnell has had a career of nearly three decades in oil separation, which consisted of founding and operating an oilfield services business called Pedros Services (merged into Crude Group Oilfield Services, and ultimately acquired by Flint Resources), as well as acquiring and operating oil separation firm Taber Water Disposal, and providing consultancy services to cannabis firms on various oil extraction processes and techniques. Through his knowledge of CO2 processing of cannabis, Mr. O’Donnell has demonstrated a distinct ability to produce consistent extractions that could be measured and used for medications based on known values of the extracts.

Bhavana Rao – Director of Extraction and Product Development: Complementing her seven years of professional experience in distillation, analytical testing, and product development, Ms. Rao holds a Master’s Degree in Food Science from the University of British Columbia and a Bachelor’s Degree in Chemical Engineering from B.M.S. College of Engineering in Bangalore. Prior to entering the cannabis space, Ms. Rao was a Manufacturing Technologist at STEMCELL Technologies, a GMP-compliant biotechnology firm based in Vancouver. Before joining CLC, Ms. Rao held R&D and extraction roles at Blissco Cannabis Corp., developing cannabis products under Health Canada regulations including products in the “Cannabis 2.0” categories. In her new capacity at CLC, Ms. Rao will be responsible for developing new processes and creating innovative formulations for proprietary cannabis products.

With an objective of producing premium quality cannabis extracts in the form of full-spectrum cannabis oil, distillates, isolates, and terpenes, CLC is confident that it will have the ability to maintain a robust rate of oil extraction from its exceptional 2020 harvest of cannabis, which could potentially be continued in subsequent growing seasons.

A photo accompanying this announcement is available at https://www.globenewswire.com/NewsRoom/AttachmentNg/f7e94d7b-972d-4a5a-bce0-8dd7f1132ccf

Readers using news aggregation services may be unable to view the media above. Please access SEDAR or the Investor Relations section of the Company’s website for a version of this press release containing all published media.

Joel Dumaresq, Chief Executive Officer and a Director of the Company commented, “The global demand for cannabis extracts such as oils, distillates, isolates, and terpenes is tremendous, especially for medicinal applications. We believe that with CLC’s fully integrated operations in cultivating, processing, and extracting outdoor-grown cannabis using the Vitalis System which meets GMP standards, we have the resources to capture much of this demand. By adding Mr. O’Donnell and Ms. Rao to our team, I believe Christina Lake Cannabis is all the more competitive as we work towards innovating novel product offerings using extracts from our proprietary strains of cannabis grown outdoors under sunlight here in Christina Lake, British Columbia.”

Christina Lake Cannabis Corp. is a licensed producer of cannabis under the Cannabis Act. It has secured a standard cultivation licence and corresponding processing/sales amendment from Health Canada (March 2020 and August 2020, respectively) as well as a research and development licence (early 2020). CLC’s facility consists of a 32-acre property, which includes over 950,000 square feet of outdoor grow space, offices, propagation and drying rooms, research facilities, and a facility dedicated to processing and extraction. CLC also owns a 99-acre plot of land adjoining its principal 32-acre site, which enables the Company to grow at a much larger scale. CLC cultivates cannabis using strains specifically developed for outdoor cultivation and in its inaugural harvest year produced 32,500 kg (71,650 lb) on its existing facility before developing an adjacent 99-acre expansion property. Such an expansion will ultimately bring CLC’s annual cultivation footprint to over 4.35 million square feet, which could enable at least 150,000 kg (330,693 lb) of low-cost, high-quality, sun-grown cannabis to be produced annually by the Company.

THE CANADIAN SECURITIES EXCHANGE (“CSE”) HAS NOT REVIEWED AND DOES NOT ACCEPT RESPONSIBILITY FOR THE ACCURACY OR ADEQUACY OF THIS RELEASE, NOR HAS OR DOES THE CSE’S REGULATION SERVICES PROVIDER.

Disclosures relating to investor relations firms retained by Christina Lake Cannabis Corp. can be found under the Company’s profile on http://sedar.com.